skip to main | skip to sidebar

I promised someone recently that I would show them how I took apart pallets and use the wood to make hives. I was hoping that I could just point them to the NBN forum pictorial posts I had made years ago. Unfortunately it seems NBN forum had some kind of glitch and lost nearly all the almost 3000 posts bar a few. So this post is to hopefully try and put together how I went about it using some old photos I can find. 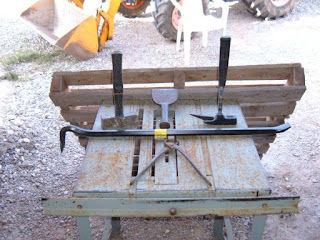 As well as strong gloves and eye protection you will need a lump hammer, bolster chisel, claw hammer, crowbar and pincers. It is also handy to have some kind of bench to de-nail on although if your knees can stand it this can be done on the ground.

Start by propping the pallet up against a wall with the side bars vertical, placing one foot against the base to keep it steady, using lump hammer and bolster chisel, place chisel in the joint of one of the end bars and the adjacent beam, hammer in until you open up a gap until the chisel meets the nails. At this point switch to the crowbar and prise further. Once the gap is opened enough, move down to the central joint between the bar and middle beam. Use the same technique to open up the middle joint. When both, top and central joints are free from the nails, just pull the side bar down and off the bottom joint by hand. 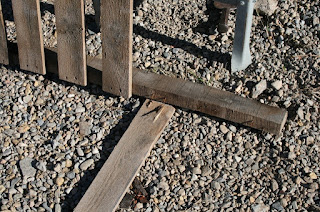 Move onto next bar and rinse and repeat until you have  stacks of bars and beams. 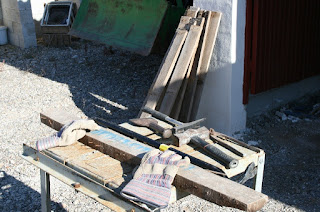 Take each bar and beam, remove nails and staples using claw hammer and pincers. Any that break off and cant be removed, hammer flush mark with a highlight colour of some kind to protect saws etc.. 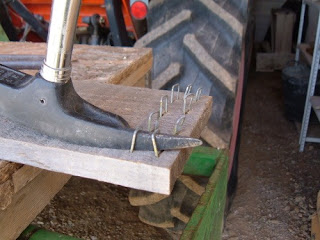 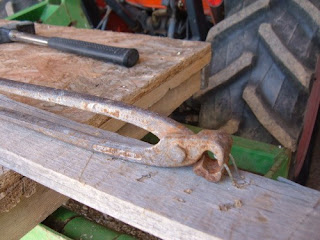 This will leave you with a considerable amount of wood which can be trimmed,  cut and joined to make perfectly serviceable hives. Even any broken parts can be used as strengthening battens etc. 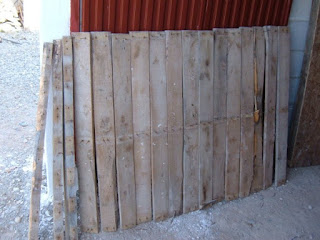 I no longer have the context of how I made the following hives but I hope these photos convey what can be made. Both this Kenyan TBH and the Warre were made with pallet wood. 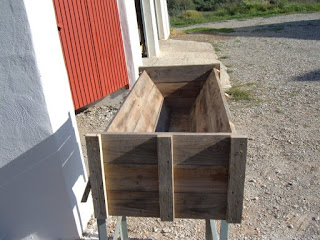 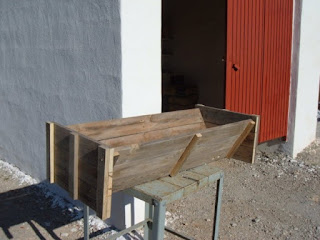 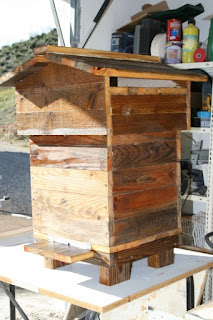 The beams from the pallets make excellent top bars. 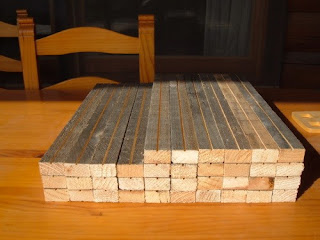 This photo shows one having the wax groove added. 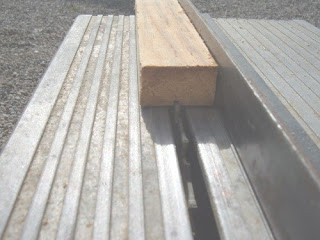 Apologies for an incomplete post but I am having to work with years old photo's and a rapidly ageing brain! :)

A May Swarm in Sweden?

It has been a while since I last wrote on this blog and that is because there is not very much for me to write about. The six bait hives I set out in different locations were not successful in catching any swarms this last season and there seems to be a distinct lack of honeybees hereabouts. I don't attribute this to anything sinister, just the previous long hard winter which had snow from October 2009 until April 2010 with temperatures going down to minus 35 degrees celsius. I despaired at not seeing any honeybees at all until I saw activity of bees coming and going at one of my bait hives at a neighbors farm. Turns out they were robbing out some old crystalysed honey in the comb of the bait hive. Well at least they cleaned the comb up for me. What made it really bad was that I had not seen one honeybee all year in my garden, not one! Then one sunny day, I was admiring the peacock butterflies on my aster flowers when I spotted a ragged wing old worker foraging on the asters. That sight lifted my spirits and gives me hope for next season. My six bait hives will be waiting to go out again and I am confident of success next year.
Posted by Norm at 12:10 PM 3 comments:

I seem to be in a minority of one when it comes to my position on ferals. I am still at odds with all of the posters on the NBN forum at this thread.
Personally, I think if you take the view that all bees are 'wild' and beekeeping itself is not natural for them, and if you keep bees that have been produced by mans' design rather than what mother nature has allowed to evolve in their local climate and flora, then it becomes clear to me which is better to propagate from. Taking a feral colony with it's queen and hence it's genetics is for me a desireable tactic to breed from and allow to repopulate other feral niches. Most ferals are runaway swarms from beekeepers anyway, managed bees originating from who knows where. These bees may have been previoulsy treated with acaricides, anti-biotics etc. In other words bees propped up by pharmacauticals and genetically weak! Are these the bees we should be using or true feral stock that have been known to exist for a number of years untreated and obviously suited to the local environment. If we increase from these true ferals and allow them to swarm and take up these feral niches, we are not commiting a 'wildlife crime' as one poster put it but rather a service to honeybees in the long run. I honestly think that some people can not see past the issue of 'disturbing nature'. Nature has already been greatly disturbed by the fact that we are keeping the bees partly for our own ends. If we accept the fact that this is the reality of the situation then my proposed using of feral genetics to bolster the feral genetics as well as my own stocks is not only desirable but indeed worthy. Rant over!
Posted by Norm at 4:22 PM 7 comments: 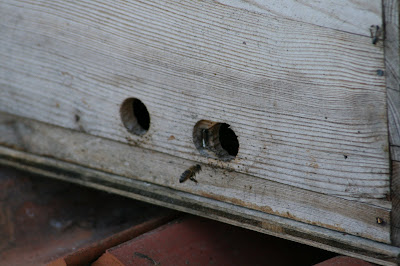 For the first time this year, I have seen honeybees here in Sweden, and the really great news is they were going in and out of one of my bait hives!

For the second year runnning I have baited a swarm in a tiny old Svea 8 frame hive. It's about the same volume as a single warre box so not within the so called optimum volume for bait hives. I have had success for a few years with smaller volume bait hives so I think the theory is somewhat suspect. I will leave them where they are on my neighbors farm for the next 3 weeks without messing with them, if it's a cast, the virgin can get mated without me disturbing her.
Posted by Norm at 8:05 PM 3 comments:

Today I put out my first bait hive at a neighbors farm a few miles away. I also prepared another which will be set out tomorrow at another neighbors farm. They were both single Svea hive boxes with eight frames, quite small as bait hives go, by volume that is, but one of these caught a swarm last year. The only lure I will be using is the bits of old comb that is still in the frames. My next batch of bait hives will be double warre boxes.
Some of you readers may have noticed that I am no longer the admin on the NBN forum. I have had three separate serious disagreements with three different beekeepers on there so I have come to the realization that the only common factor was me! I guess it is me that is out of harmony with the prevailing thinking. I cannot accept the dogma that is being espoused, dis-allowing certain items for discussion etc. It is my strong belief that you cannot tell someone how they must keep their bees. My way is that I want to show how I keep my bees and the reasons why I do it that way. Anyway, I wish them well and hope they get on better now without my input.
Posted by Norm at 5:16 PM No comments:

Neither of my two hives in Sweden made it through the winter. The kenyan hive in the barn had a wood shelf collapse onto it knocking off the roof and the insulation. The follower board was away from the top bars and inside all the comb had been consumed by hungry rodents.The warre hive in the beehouse looks like it was submerged in the deep snow for too long. I have been told the snow was at least a metre deep in most places which would have covered the entrance. If this was for a short amount of time I don't think it would have been a problem.But the snow was around for months and the ventilation of the hive was reduced to virtually nothing. Lots of mouldy combs(pollen) and lots of honey that I was able to salvage.These bees had plenty of stores (honey not sugar) so they did not starve. It got down to minus 30 degrees but I think it was the damp condensation with no ventilation that killed this hive. Some lessons learned about winter in Sweden and time to start from scratch here so probably not many more posts to this blog for awhile.
Posted by Norm at 5:31 PM 7 comments:

Exactly one year ago today on this blog I reported the return of the bee eaters from their winter in South Africa. This evening, I heard them again. I always hear them first, their chiruping sounds are very distinctive. Sure enough they are back, circling over our log cabin and taking bees in flight. How incredible that they return on exactly the same day! 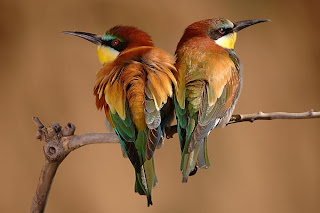 My friend on Facebook and the NBN forum, Gary Fuqua from Illenois in the USA recently had a thermography assessment done on his house. Whilst the guy was there taking thermal images, he got him to take a thermal image of one of his kenyan top bar hives. Gary has kindly allowed me to reproduce the image here. It was 20 degrees F outside the hive when this was taken. You can see the large red area of the winter cluster and the 3 red entrance holes. My conclusion was that it shows the entrance holes ventilating hot(warm & moist) air out. The thermal cycle created by the cluster drives the ventilation of the hive. My theory is that if the cluster of bees dwindled to a less than 'critical mass', the thermal cycle would slow down or stop and hence the ventilation would also stop. Maybe this is this the reason that some beekeepers are seeing mould in their hives? 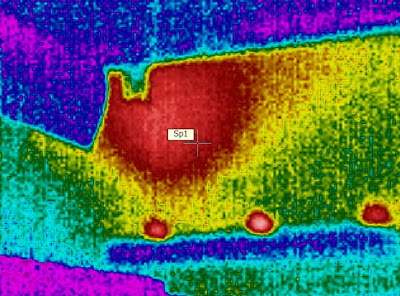 Friends of the Bees

Become a Friend of the Bees